Dave Merchant has made a business out of tanoak. a wood commonly discarded by loggers in this area.

Dave Merchant is a 50-year-old logger who takes something that would be otherwise burned as firewood and makes it into something useful, even beautiful.

It's a hardwood called tanoak, found in the forests of the Santa Cruz Mountains among the redwoods and Douglas fir.

Merchant lives in the woods above Bonnv Doon. After eight ears of milling and drying tanoak at his home on Pine Flat Road, he's gotten serious about marketing the wood through his business, Out Of The Woods.

"When I first found this wood, it was kind of discarded," he said. "It would be in the way, and the loggers would leave it out in the woods. They had a hard time finding even firewood people to take it. especially if it was in a remote area. I saw it being wasted."

He did his homework and found out that tanoak has some commercial history in California. Before the 1906 earthquake, many of the homes in San Francisco had floors made out of tanoak, he said. And back in the 1970s and '80s - while Merchant was building trails for the U.S. Forest Service and logging in Oregon and northern Idaho -California developed a small market for tanoak lumber: The effort was largely unsuccessful, for a variety of reasons, Merchant said.

He started experimenting with the 20 to 60-inch-wide tanoak found in the forrest and brought a small mill for quarter-sawing the wood. 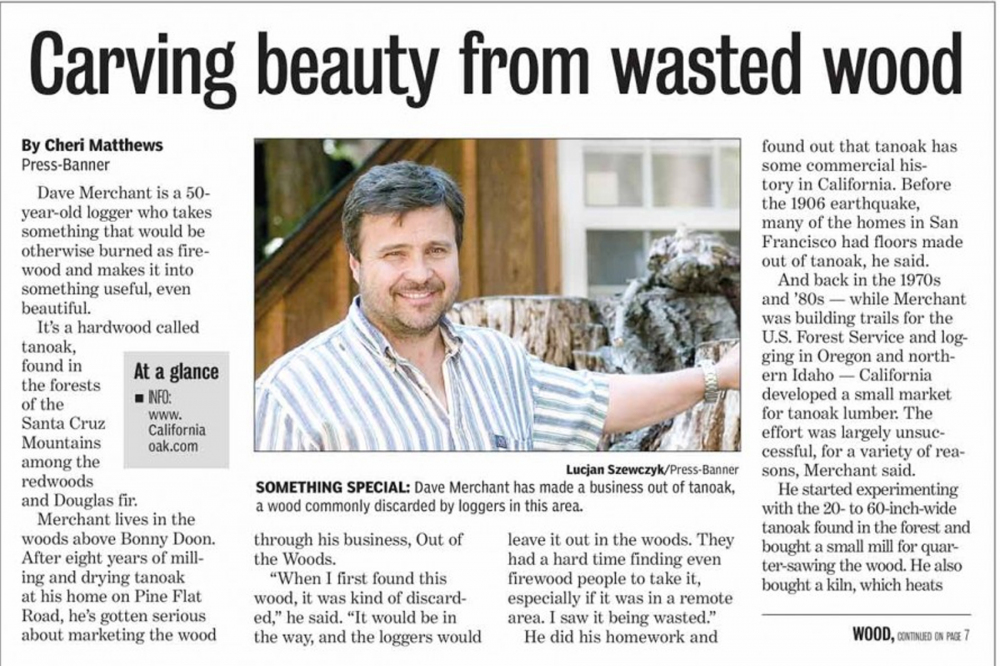